Above is a selection of my favorite Kung fu Movies, many of which i use to watch as a kid.

Most of you who know me will know I’ve always been into kung fu movies.

I can remember my uncle bringing a batch home when i was young and watching them late night one after the other.

Even though some of these were made before my time, I totally loved them, many a time trying out the moves I had learned,  on friends and family.

I guess you either love it or you don’t.

My favorite actor of this genre would have to be Jackie Chan and Bruce lee.

In 1976, Jackie Chan received a telegram from Willie Chan, a film producer in the Hong Kong film industry who had been impressed with Jackie’s stunt work. Willie Chan offered him an acting role in a film directed by Lo Wei. Lo had seen Chan’s performance in the John Woo film Hand of Death (1976) and planned to model him after Bruce Lee with the film New Fist of Fury.[11] His stage name was changed to Sing Lung (Chinese: 成龍, also transcribed as Cheng Long,[17] literally “become the dragon”) to emphasise his similarity to Bruce Lee, whose stage name meant “Little Dragon” in Chinese. The film was unsuccessful because Chan was not accustomed to Lee’s martial arts style. Despite the film’s failure, Lo Wei continued producing films with similar themes, but with little improvement at the box office.[18]

Chan’s first major breakthrough was the 1978 film Snake in the Eagle’s Shadow, shot while he was loaned to Seasonal Film Corporation under a two-picture deal.[19] Director Yuen Woo-ping allowed Chan complete freedom over his stunt work. The film established the comedic kung fu genre, and proved refreshing to the Hong Kong audience.[20] Chan then starred in Drunken Master, which finally propelled him to mainstream success.[21]

Upon Chan’s return to Lo Wei’s studio, Lo tried to replicate the comedic approach of Drunken Master, producing Half a Loaf of Kung Fu and Spiritual Kung Fu.[16] He also gave Chan the opportunity to co-direct The Fearless Hyena with Kenneth Tsang. When Willie Chan left the company, he advised Jackie to decide for himself whether or not to stay with Lo Wei. During the shooting of Fearless Hyena Part II, Chan broke his contract and joined Golden Harvest, prompting Lo to blackmail Chan with triads, blaming Willie for his star’s departure. The dispute was resolved with the help of fellow actor and director Jimmy Wang Yu, allowing Chan to stay with Golden Harvest.[19]

In late 1972, Lee began work on his fourth Golden Harvest Film, Game of Death. He began filming some scenes including his fight sequence with 7 ft 2 in (218 cm) American Basketball star Kareem Abdul-Jabbar, a former student. Production was stopped when Warner Brothers offered Lee the opportunity to star in Enter the Dragon, the first film to be produced jointly by Golden Harvest and Warner Bros. Filming commenced in Hong Kong in February 1973. One month into the filming, another production company, Starseas Motion Pictures, promoted Bruce Lee as a leading actor in Fist of Unicorn, although he had merely agreed to choreograph the fight sequences in the film as a favour to his long-time friend Unicorn Chan. Lee planned to sue the production company, but retained his friendship with Chan.[59] However, only a few months after the completion of Enter the Dragon, and six days before its July 26, 1973 release,[60] Lee died. Enter the Dragon would go on to become one of the year’s highest grossing films and cement Lee as a martial arts legend. It was made for US$850,000 in 1973 (equivalent to $4 million adjusted for inflation as of 2007).[61] To date, Enter the Dragon has grossed over $200 million worldwide.[62] The film sparked a brief fad in martial arts, epitomised in songs such as “Kung Fu Fighting” and TV shows like Kung Fu.

Robert Clouse, the director of Enter the Dragon and Golden Harvest revived Lee’s unfinished film Game of Death. Lee had shot over 100 minutes of footage, including out-takes, for Game of Death before shooting was stopped to allow him to work on Enter the Dragon. In addition to Abdul-Jabbar, George Lazenby, Hapkido master Ji Han-Jae and another of Lee’s students, Dan Inosanto, were also to appear in the film, which was to culminate in Lee’s character, Hai Tien (clad in the now-famous yellow track suit) taking on a series of different challengers on each floor as they make their way through a five-level pagoda. In a controversial move, Robert Clouse finished the film using a look-alike and archive footage of Lee from his other films with a new storyline and cast, which was released in 1978. However, the cobbled-together film contained only fifteen minutes of actual footage of Lee (he had printed many unsuccessful takes)[63] while the rest had a Lee look-alike, Kim Tai Chung, and Yuen Biao as stunt double. The unused footage Lee had filmed was recovered 22 years later and included in the documentary Bruce Lee: A Warrior’s Journey.[64] 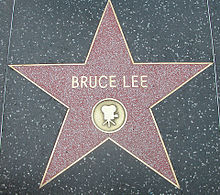 Bruce Lee’s star on the Hollywood Walk of Fame

Apart from Game of Death, other future film projects were planned to feature Lee at the time. In 1972, after the success of The Big Boss and Fist of Fury, a third film was planned by Raymond Chow at Golden Harvest to be directed by Lo Wei, titled Yellow-Faced Tiger. However, at the time, Lee decided to direct and produce his own script for Way of the Dragon instead. Although Lee had formed a production company with Raymond Chow, a period film was also planned from September–November 1973 with the competing Shaw Brothers Studio, to be directed by either Chor Yuen or Cheng Kang, and written by Yi Kang and Chang Cheh, titled The Seven Sons of the Jade Dragon.[65] Lee had also worked on several scripts himself. A tape containing a recording of Lee narrating the basic storyline to a film tentatively titled Southern Fist/Northern Leg exists, showing some similarities with the canned script for The Silent Flute (Circle of Iron).[66] Another script had the title Green Bamboo Warrior, set in San Francisco, planned to co-star Bolo Yeung and to be produced by Andrew Vajna who later went on to produce First Blood.[59] Photo shoot costume tests were also organized for some of these planned film projects.